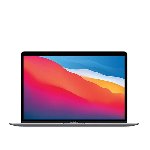 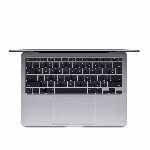 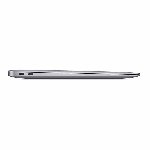 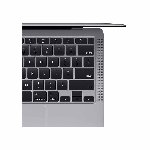 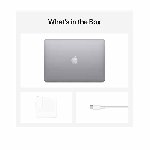 The Apple 13" MacBook Air features Apple's first chip designed specifically for Mac. The Apple M1 integrates the CPU, GPU, Neural Engine, I/O, and more into a single system on a chip (SoC). Tackle your projects with the fast 8-Core CPU and take on graphics-intensive apps and games with the 7-core GPU. Accelerate machine learning tasks with the 16-core Neural Engine. Complete with a silent, fanless design and up to 18 hours of battery life, the MacBook Air is still portable, but now a lot more powerful. It also has 8GB of unified RAM and a 256GB SSD.

With over 4 million pixels, the 13.3" Retina Display features a 2560 x 1600 screen resolution and a 16:10 aspect ratio for 227 pixels per inch (ppi). The display also features up to 48 percent more color than the previous generation. With True Tone technology, the white balance automatically adjusts to match the color temperature of the light around you for a more natural viewing experience.

Connect to the internet via Wi-Fi 6 (802.11ax) and use compatible wireless peripherals and accessories with Bluetooth 5.0. The two Thunderbolt 3 ports provide USB4 support and can even connect to the Apple Pro Display XDR in full 6K resolution. Apple also included studio-quality mics for clear recordings and calls. There is also Apple's latest camera ISP in the M1 chip, which enables sharper images and more details in shadows and highlights in video calls. Keep your MacBook Air secure with Secure Enclave in M1 as well as Touch ID. The backlit Magic Keyboard provides a comfortable typing experience, and the Force Touch trackpad allows for precise cursor control, pressure-sensing capabilities, and Multi-Touch gestures.

Packed with 16 billion transistors, the Apple M1 integrates the CPU, GPU, Neural Engine, I/O, and more into a single system on a chip (SoC). Built with 5nm process technology, the Apple M1 delivers the performance you need without sacrificing power efficiency. The Apple M1 features four high-performance cores, each designed to run a single task, which allows for multithreaded workloads. There are also four efficiency cores to handle lighter workloads, using only a tenth of the power while still delivering fast performance. This means the Apple M1 performs up to 3.5 times faster than the previous generation while still delivering battery life up to 15 hours of wireless web browsing and up to 18 hours of video playback.

With four times as many pixels as an HD display, the 13.3" Retina IPS Display provides up to 48 percent more color than the previous generation. The Retina Display has a 2560 x 1600 screen resolution and a 16:10 aspect ratio for 227 pixels per inch (ppi). The display glass goes right to the edge of the screen, making the bezels 50 percent thinner than before. Moreover, True Tone technology automatically adjusts the white balance to match the color temperature of the surrounding light.